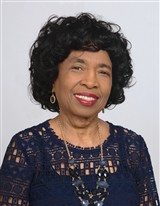 In pursuit of her passions, Dr. Jewel Taylor Thompson found the perfect career at Hunter College. A professor in the Music Department since 1997, she combines her love for music and education in a way that enthralls her students and enlightens the younger generations. Dr. Thompson primarily teaches classes in music theory, which includes the materials used for music notation, such as scales and chords, and musicianship, such as sight-singing and ear training. She also has experience serving Hunter College as an assistant professor, an associate professor, and an adjunct assistant professor. Prior to her current endeavors, Dr. Thompson held the title of assistant professor at West Virginia Institute of Technology, West Virginia State College, and Virginia State University.
​
Over the course of her career, Dr. Thompson also enjoyed roles outside of academia. She was the Organist for the Abyssinian Baptist Church in New York City from 1978 to 1983, and the Minister of Music and Choirmaster from 1983 to 2007. Between 1989 and 1993, Dr. Thompson was the Chair of the Arts Program for The Links, Incorporated, and between 1995 and 2003, she served as the Eastern Area Music Director. Additionally, she was a delegate of the International Women’s Leadership Association in 2015, and a member of the Scholarship Selection Committee for the United Negro College Fund.

One of Dr. Thompson’s main life goals is to make a difference in as many lives as she can, and to spread the passion she has for music. Thus, she authored, “Samuel Coleridge-Taylor: The Development of His Compositional Style,” in 1994, and contributed to the International Dictionary of Black Composers in 1999. She has written and arranged more than a hundred compositions for mixed voices—many of which are published—and participated as a member of the Community Arts Advisory Council for the New Jersey Symphony Orchestra in 2013.
​
Dr. Thompson prepared for her endeavors by earning a PhD and a Master of Arts from the Eastman School of Music in 1982 and 1960, respectively, and a Bachelor of Science from Virginia State University in 1956. She ensured that she remained connected to her peers and any advancements in her field through her affiliation with the American Society of Composers, the Music Theory Society of New York State, and American Women Composers, Inc.

Although Dr. Thompson has experienced a number of great accomplishments, she feels the best is yet to come. She is extremely proud of the honors and awards she has won, however, as they recognize her dedication and passion for her work. Notably, Dr. Thompson received the Music of the African Diaspora Award in 2013, the Diamond of Faith Award from the Abyssinian Baptist Church in 2007, and the Outstanding Ministry Award from the Council of Churches of New York City in 2005. She was also named a Dame of Honor by the Knights of Malta in 1982, and was featured in numerous editions of Who’s Who in America, Who’s Who in the World, Who’s Who of American Women and Who’s Who in American Education.

​When Dr. Thompson isn’t working, she likes to read, travel, and spend time with her family.