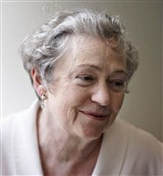 As the daughter of the world-renowned anthropologist Margaret Mead and the linguist, social scientist, and anthropologist Gregory Bateson, it’s no wonder that Mary Bateson has spent her career as a cultural anthropologist and American writer. Inspired by her parents’ work, Dr. Bateson set off to follow in their footsteps, earning a Bachelor of Arts from Radcliffe College in 1960 and a PhD from Harvard University in 1963.

As an anthropologist and linguist, Dr. Bateson held several two-month residencies at the Rockefeller Foundation Conference and Study Center in 1983, the Mary Ingraham Bunting Institute in 1984, and the McDowell Colony in 1993, 1996, and 1997, where she worked on her writings. She is the author of numerous books, including “With a Daughter’s Eye: A Memoir of Margaret Mead and Gregory Bateson,” “Willing to Learn: Passages of Personal Discovery,” “Our Own Metaphor: A Personal Account of a Conference on Consciousness and Human Adaption,” “Arabic Language Handbook,” and “Composing a Further Life: The Age of Active Wisdom,” where she encourages older adults to claim a voice for the future. She co-authored “Angels Fear: Towards an Epistemology of the Sacred,” and “Thinking AIDS.”

Dr. Bateson has also given her time to community endeavors. She is the national co-chairman of Seniors4Kids program of Generations United, a visiting scholar at the Center on Aging and Work/Workplace Flexibility at Boston College, and was a consultant on the Americans for Library Council on Lifelong Access Program at the American Library Association. In addition, she was president of the Institute for Cultural Studies. Dr. Bateson is a member of the American Anthropological Society and the Lindisfame Association, and is on the advisory board of the University Corporation for Atmospheric Research.

In recognition of her achievements in her field, Dr. Bateson has received the Norbert Weiner Gold Medal from the American Society for Cybernetics, the Lifetime Achievement Award in Social Change and Positive Aging from the Institute for Social Innovation at Fielding Graduate University, and the Neil Postman Award for Career Achievement in Public Intellectual Activity from the Media Ecology Association. Further, she was honored to earn the Books for a Better Life Award, the Empathy Award from Volunteers of America, and the John P. McGovern Award in Behavioral Sciences from the Smithsonian Institution. Dr. Bateson was a Guggenheim Fellow, a Ford Foundation Fellow, and a grantee of the National Science Foundation and the Wenner Gren Foundation. She also received an honorary Doctor of Humane Letters from Fordham University, Mills College, Marygrove College, DePaul University, and the University of Redlands.