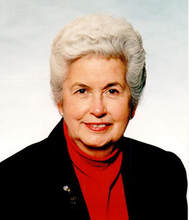 Noted for her aptitude for business, Ann Meagher Williams excelled during more than five decades in the field.  Her longest position was director of community affairs at Cape Cod Hospital, where she stayed from 1977 until 1995. There, she was responsible for helping to maintain a positive image of the hospital and making people more comfortable with seeking medical treatment when they needed it. She was also involved with planning fundraising events for expanding a children’s ward.

Over the course of her career, Ms. Williams held a variety of other positions as well. She started her professional journey as a radioisotope biologist for the Air Force Cambridge Research Center from 1952 until 1955 and as an assistant manager for Roxbury Businessmen’s Exchange from 1956 until 1966. While in that role, she also served as the owner and operator of Chatterline between 1961 and 1966. In 1968, Ms. Williams became a realtor for James E. Murphy Inc., in Hyannis, Mass., for nine years. She returned to the company in 1995, this time at the Osterville, Mass., branch, and remained there until her retirement in 2005.

​Ms. Williams prepared for her endeavors by earning a Bachelor of Science from Chestnut Hill College in Philadelphia in 1950 and a Master of Science from Boston College in 1952. She also earned an honorary degree from Cape Cod Community College in 2009. To keep up with developments in her industry, she joined prominent professional organizations like the National Association of Hospital Development, the American Society of Hospital Marketing and Public Relations, the Center for Individual and Family Services, and the Hyannis Area Chamber of Commerce.

Contributing her expertise to her community, Ms. Williams has been on the board of directors of the YMCA Cape Cod since 2004, and has been a member of the Cape Cod Community College Educational Foundation since 1997. She has been a Rotarian for 40 years, serving as vice chairman of the Rotary Leadership Institute, governor of Rotary International, membership and literacy coordinator, and area representative. Furthermore, Ms. Williams has given her time to Cape Cod Regional Tech High School, and was chairman of the finance committee of the City of Barnstable, MA. She supports the charitable missions of the American Cancer Society, Pure Water for the World, and United Way of Cape Cod. The highlight of her career was her trip to Nigeria to work on defeating polio.

Ms. Williams has received numerous accolades in recognition of her dedication and service. Notably, she was named Woman of the Year by the Business Professionals Women’s Club in 1982 and was honored with a certificate of appreciation from the American Cancer Society in 1983 and 1988, the President Recognition Award from United Way of Cape Cod in 1989, the Life Achievement Award from the Massachusetts Association of School Committees in 2000, the Volunteer of the Year Award from YMCA Cape Cod in 2008, and the Mission Impact Champion Award from the YMCA Cape Cod in 2010. She also earned the Cape Cod Mercy Otis Warren Woman of the Year Award in 2016, and was featured in various editions of Who’s Who in America, Who’s Who in Medicine and Healthcare, Who’s Who in Science and Engineering, Who’s Who in the World, and Who’s Who of American Women.