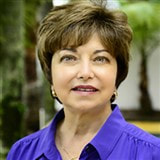 Fueled by her love for language and literature, Barbara Mujica spent more than five decades writing, teaching, and sharing her passion. She started as an instructor of French at the University of California, Los Angeles in 1963, but left after a year to become an associate editor of modern languages for Harcourt Brace Jovanovich, now Houghton Mifflin Harcourt. In 1973, Dr. Mujica joined The City University of New York as an assistant professor of romance languages and as an instructor, and in 1974, she joined Georgetown University as a professor of Spanish. She initiated the Student Veterans Association at the latter school, and retired in 2017 happy to leave with the security that the program will be there for veterans.
​
When Dr. Mujica wasn’t teaching, she was writing. She is most proud of authoring “Sister Teresa,”which was published in Spanish in 2017 and which was adapted for the stage in 2013, and “Frida: A Novel,” which was published in 18 languages. Some other notable publications include “I am Venus: A Novel,” “Teresa de Avila: Lettered Woman,” “Far From My Mother’s Home: Short Stories,” and “Sanchez Across the Street: Short Stories.” She also edited books like “Shakespeare and the Spanish Comedia,” “El Texto Puesto en Escena,” “Premio Nobel,” “Looking at the Comedia in the Year of the Quincentennial,” and “Texto y Vida: Introduccion a la Literatura Hispano-Americana.” She was both the author an editor of “A New Anthology of Early &Early Modern Spain: Sophia’s Daughters,” “Milenio,” and “Siglos XVII y XIX.” She continues to write to this day, and is currently finishing a novel.

​Dr. Mujica prepared for her endeavors by earning a PhD from New York University in 1974, a Master of Arts from Middlebury College in 1965, and a Bachelor of Arts from the University of California, Los Angeles, in 1964. Additionally, she became certified in advanced level German language through the German International School in Washington D.C. To keep in touch with her peers and community, Dr. Mujica joined prominent organizations like the Modern Language Association of America, the Renaissance Society of America, the Sixteenth Century & Conference, PEN America, and the Writer’s Center. She also held leadership roles such as theater director and president of the Association for Hispanic Classical Theater, Inc., judge of the Helen Hayes Theater Awards, judge of the Gabriela Mistral Poetry Contest, board member of the GALA Theatre, and faculty member of the Summer Institute at the National Endowment for the Humanities.

As a testament to her hard work and dedication, Dr. Mujica was a grantee of Georgetown University from 2005 to 2006, the recipient of the Hoepner Award for Fiction in 2002, and the winner of the Pangolin Prize for Best Short Story in 1998 and the E.L. Doctorow International Fiction Competition in 1992. In 1990, she was honored to be named One of the 50 Best Op-Eds of the Decade by the New York Times Company, and in 1987, she was honored to be a grantee of Poets and Writers of New York through the Spanish Government. Other accolades include a distinguished service medal and a best professor award from Georgetown University, six Maryland Writers’ Association Awards, five Short Stories Awards, and recognition as a Penfield Fellow. She attributes her success to her supportive family, supportive university and hard work.