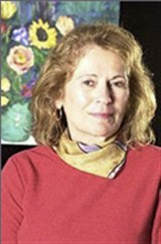 Drawn to nature, Carolyn Zaroff loves sharing the beauty she sees with others through oil paintings. She chose the medium because of the way it reflects light and allows her to capture scenes such as the vineyards of her home in Northern California or the sunset reflecting off the San Francisco Bay in great depth. In an interview with Saatchi Art, Ms. Zaroff discussed her inspiration, stating, “My feelings about nature tumble out in bold color. My eye seeks the unexpected and I am drawn to contrast between simple forms and complex layers.” She is represented by the Art People Gallery in San Francisco, the San Francisco Women’s Art Gallery and the Healdsburg Center for the Arts, and is thrilled to be included in private collections across the country, as well as in “Art of Northern California” and “American Art Collector.”

Before she was an artist, Ms. Zaroff was a writer. She was the president of Zaroff Communications from 1977 to 1980, an advertising manager for the Rochester Institute of Technology from 1980 to 1983, the editor of Rochester Women Magazines from 1983 to 1985 and an advertising manager for the Marlow Group, Inc., from 1986 to 1990. She has experience freelancing in Aspen, Colorado, has contributed numerous articles to professional journals, and has served as a trustee and the president of the Aspen Writers Foundation.

To keep in touch with developments in her field and community, Ms. Zaroff obtained a Bachelor of Arts from George Washington University in 1956 and became a member of the Asian Art Museum, San Francisco Museum of Art, De Young Fine Arts Museum and Aspen Women’s Forum. One of the highlights of her journey was being taught by Ning Hou, an artist from China. She is also proud to be a member of the Sausalito Village, which helps seniors live at home, and to have been a trustee of RESPONSE in Aspen since 1987. In the past, Ms. Zaroff was a member of the New York State Democratic Committee, serving as Jimmy Carter’s coordinator, the president of the Rochester Merchants Association, a delegate of the Democratic National Convention and the town leader of the Brighton, New York, Democratic Committee.
​
Looking to the future, Ms. Zaroff intends to continue painting and enjoying her surroundings. Her hobbies when she isn’t working include biking, swimming, hiking, traveling and spending time with her eight grandchildren. She also volunteers as an assistant art teacher in the arts department in the Martin Luther King School within the Sausalito School District. The post earned her an honored volunteer award. She hopes to be remembered as a humane, caring person who enjoyed her life and her environment. She has an unending awe for where she lives.
"Red Dawn"
Previous
Next
Facebook
Twitter
LinkedIn