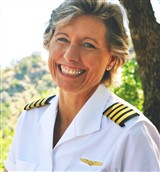 Throughout her career, Debra Bartz has consistently balanced her dual positions as a holistic life coach and pilot with persistence and tenacity. As the owner of Learn Conquer Soar Coaching, the holistic integrative nutrition and coaching company she created in 2010 to promote health and wellness, Ms. Bartz encourages her clients to lead transformational healthy lives. Further, as she has taken to the skies as a pilot since 1982, most recently as the captain of an Airbus 320 for United Airlines, she has paved the way for other female pilots and continues to mentor aspiring women pilots to excel in the field of aviation.
​
Ms. Bartz began her career by earning a Bachelor of Science from the U.S. Air Force Academy in 1982, and a Master of Science in human resources manage from Golden Gate University in 1989. She holds a certification as a holistic practitioner from the American Association of Drugless Practitioners, is a certified master transformational method life coach, a hormone-trained specialist, and a board certified gluten practitioner. She also has a diploma in fitness and nutrition. Additionally, she is an independent distributor for Bemer, a company that designs products to promote well-being.

Ms. Bartz attributes her success in the world of aviation to her leadership skills and persistence. Additionally, she credits having owned her own business as a holistic practitioner. Ms. Bartz became involved in her profession because she wanted to make a difference in people’s lives. Accordingly, she uses her integrated nutritional skills while volunteering to help the elderly stay in their homes and help them with their nutrition. In addition, she contributes her experience in lifestyle coaching to many nonprofit organizations.

As a testament to her achievements, Ms. Bartz has received numerous awards, including various ribbons from the U.S. Military and selection as Woman of the Year from the National Association of Professional Women from 2011 to 2012. She was also honored with inclusion in three editions of Who’s Who of Emerging Leaders in America, two of Who’s Who of American Women, and one of Who’s Who in the West.