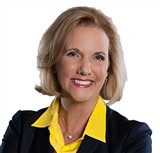 Focusing on personal injury, medical malpractice and social security and disability, Gayle Gerling Pettinga has served as the owner and managing attorney of Gerling Law since 1994. The firm operates under a set of core values, including integrity, civility, and respect, that ensure the client comes first. Under that mindset, Ms. Pettinga has become a well-respected figure in both her personal and professional lives. She is lauded as engaged, empathetic, and compassionate, all assets in her endeavors.
​
One of the things Ms. Pettinga is most proud of is her community involvement. She believes it’s important to use her abilities to give back in whatever way she can, and her firm does too. Thus, she has founded programs like the Gerling Law Great Helmet Giveaway, which has collected more than 7,000 bicycle helmets for children, and the Gerling Law Recycle Bag Initiative, which has offered more than 23,000 recycle bags to individuals and civic organizations. Outside of the firm, Ms. Pettinga has supported the charitable missions of organizations like the United Way of Indianapolis, Race for the Cure, the Indiana Governor’s Art Awards, and the Indianapolis Chamber of Commerce. She has also participated as a volunteer with the Evansville Christian Life Center, co-chair of the Women’s Fund of Vanderburgh County, board member of Holly’s House, founding member of the Juvenile Guidance Foundation, and board president of Evansville School Day, among others.

As a testament to her success, Ms. Pettinga was selected as one of the Ten Best Attorneys for Indiana by the American Institute of Personal Injury Attorneys, the Top 100 Trial Lawyers by the American Trial Lawyers, and a Peer Review Rated Attorney by Martindale-Hubbell. Additionally, she was a finalist for the Spirit of Giving Award by the Vanderburgh Community Foundation and the Celebration of Leadership Award by Leadership of Evansville. She attributes her success to her parents, first grade teacher, and high school humanities teacher, who all inspired and encouraged her.