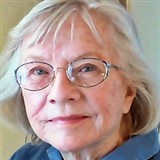 In Gene K. Garrison’s eyes, one of the biggest thrills in life is getting published. She entered the literary field after moving to Cave Creek, Ariz., to work on the New Dick Van Dyke Show, finding a fascinating bar full of cowboys, and writing an article on it. She sent it to The Arizona Republic, the state’s largest newspaper, and they accepted it immediately. This experience really encouraged her writing, and led her to her next position at a magazine called Carefree Enterprise. Ms. Garrison loved that the job gave her the opportunity to interview and meet a wide variety of people. She produced feature articles for the magazine for 20 years, during which time she started freelancing articles and photographs and writing books.
​
Besides writing, Ms. Garrison is also passionate about art, dating back to her early twenties. She started with drawing and perspective, watercolor, architectural drawing, and ceramics, and then developed into mediums such as painting, life drawing, art history, sculpture, photography, and cinematography. She exhibited her photographic art at Es Posible Gallery and at Imagine Gallery.  Ms. Garrison also displayed her work at Desert Artists, Inc., an artist cooperative she founded, between 1983 and 1999. She attributes her success to her mentors, Jason Williamson, A.W.S., a well-known watercolorist, William Ahrendt, an art instructor and artist extraordinaire, and Jan Sitts and Joella Jean Mahoney, both outstanding abstractionists. Ms. Garrison considers her own style to be independent and experimental, and feels that is conveyed through both her writing and her art.

Most recently, in 2018, Ms. Garrison contributed to “Cowboy’s Don’t Do Lunch: The Photographs of Herb Cohen,” and in 2010, she produced the second edition of “Javelina, Have-uh-WHAT?” She initially authored that book in 2003. Other publications include, “There’s Something About Cave Creek (It’s the People),” “Widowhood Happens,” “Wedgewood,” and “From Thunder to Breakfast.” The piece she is most proud of, however, is “Artists of Sedona, 1930-1999.” This was the first book written about famous artists who live, or have lived, in Sedona, Ariz., and it earned her a nomination for the Governor’s Award in 2016. It was written in narrative style. Lennie Campello, of the Daily Campello Art News, in the last paragraph of his review, wrote, “You can feel Garrison’s love for the artists, for Sedona, and for its history. It is a perfect example of how an art history book can be crafted so that it not only cements the art history of a city, but also honors the artists who created it.”

Ms. Garrison began her higher education in 1948 at Arizona State University, graduated from Phoenix College with an Associate of Arts degree, and continued with postgraduate work at Glendale Community College. She also became certified by the New York Institute of Photography. To keep in touch with her peers and professional communities, Ms. Garrison joined prominent organizations such as the International Society of Experimental Artists, Critique Group Q2 Artists, the Sedona Arts Center, the Sedona Writers Salon, the Sedona Area Guild of Artists, and Western Writers of America. Previously, she was a member of Professional Writers of Prescott, the Sedona Camera Club, a tutor for the Sedona Literacy Center, and a historian, stage manager, performer, and directors’ assistant for the Desert Foothills Community Theater.