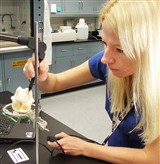 Dr. Smith’s research has drawn much acclaim from her community; it was featured in Atlas of Science in 2016, the “ScienceNOW” section of Science magazine in 2013, and the “Highlights of Recent Literature” in Science Magazine in 2009. Another professional highlight was being invited to join the National Board of Osteopathic Medical Examiners clinical faculty in the Biomedical Sciences Division of Anatomy.
​
Looking for ways to share her distinctive background and knowledge, Dr. Smith became the editor of BioMed Research International, a grant reviewer for The Leakey Foundation, and a guest editor of Quantitative Anatomy. Further, she was a manuscript reviewer for numerous publications, including the Midcontinental Journal of Archaeology, Reports in Medical Imaging, the Journal of Human Evolution, the South African Journal of Science, the American Journal of Human Biology, and the Annals of Human Biology, among others.