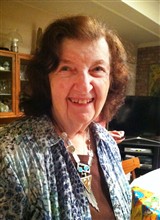 Drawing and painting all her life, Honey Kurlander has garnered experience in a wide variety of subject matters and styles. She is inspired by what she sees and where she is, so for a while, she focused on New York scenes. Ms. Kurlander would visit places throughout the city and sketch them, and then go home and paint. Her work also features a lot of flowers and people. Her preferred mediums are oil and acrylic, and her style encompasses a mixture of impressionism, surrealism, abstraction and realism.
​
Over the years, Ms. Kurlander has built a strong reputation for her showings in art exhibitions and juried competitions. Some of her most notable solo exhibitions were at the Kaigado Gallery in Japan, Gallerie Marcel Bernheim in France and the Garden City Galleries in New York. In recognition of her success and acclaim, her work is represented in the permanent collections of the Dietz Museum in Germany, the C.W. Post College Art Center, Long Island University, Nassau Community College and Grumbacher, Inc., among others. Further, one of her paintings was selected to be used in a television show, and her achievements have been highlighted in numerous editions of Who’s Who in America, Who’s Who in American Education, Who’s Who in the East, Who’s Who in the World and Who’s Who of American Women.

Ms. Kurlander is most proud, however, of teaching others. She was an art instructor at East Meadow High School from 1958 to 1960, an art instructor at Kurlander Studio in East Meadow, New York, from 1958 to 1979 and an art instructor at Kurlander Art Studio in Old Westbury, New York, from 1979 to 2000. Ms. Kurlander moved her studio again in 2001, this time to Columbia, Maryland, where she remains to this day. She loves taking people with nothing but a desire to paint and helping them produce terrific paintings. Her own educational background includes certification in illustration from the Pratt Institute in 1948 and coursework at the Parsons School of Design.