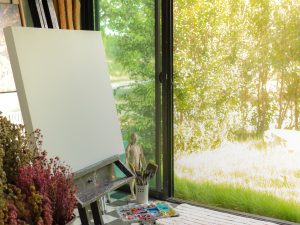 Growing up during the Great Depression, Janet Heinicke, EdD, was encouraged by her mother to be sensitive to her environment and to view the world carefully. Her mother was a welfare worker and when she went to check up on homes, Dr. Heinicke would stay in the car, drawing and observing. Art became her passion, and she dreamed of a career in the exclusive field. She worked hard to make that dream a reality and finally, in 1952, it paid off. After graduating from Wittenberg University with a Bachelor of Science, she landed a job as the supervisor of elementary art at Goshen Community Schools in Indiana. Dr. Heinicke was thrilled, as the position enabled her to share her love with the younger generations and guide their development, but her journey was far from over.
​
Still looking for ways to grow and leave a lasting artistic legacy, Dr. Heinicke decided to become an art teacher at Shaker Heights Public Schools in Ohio in 1954. She left the position a year later, the same year she earned a Master of Science from the University of Wisconsin. The accomplishment propelled her to her next post as an assistant professor of art at Judson College in Elgin, Illinois, which she held from 1960 to 1962 and then from 1969 to 1974. Dr. Heinicke also served as the director of the Judson College Art Gallery during the latter time range. To advance herself further, she obtained a Master of Fine Arts and an EdD in education administration from Northern Illinois University in 1977, and completed postgraduate studies at Syracuse University. Dr. Heinicke then joined Kankakee Community College as a program coordinator, and Simpson College as the chairman of the Fine Arts Division and the director of the Farnham Galleries. She spent nearly two decades with the latter institution, upon which she retired and became a professor emeritus. She still holds the title to this day.

To stay connected to her peers, Dr. Heinicke joined a number of prominent professional organizations, including the Chicago Artist Coalition and the Art Education Association. She also volunteered her services as the superintendent of the Fine Arts Iowa State Fair, the chairman of the building and planning committee at the Redeemer Lutheran Church in Indianola, Iowa, and a member of the community development advisory panel for the Iowa Arts Council.

Dr. Heinicke’s hard work and dedication did not go unnoticed. She was proud to receive the Faculty Research Award from Simpson College in 1994, an Alumni Citation from Wittenberg University in 2002 and the Robert Ray Outstanding Volunteer Award from the Iowa Sister States in 2007, among other accolades. Further, she was honored with inclusion in three editions of Who’s Who in America, three editions of Who’s Who of American Women and one edition each of Who’s Who in American Education, Who’s Who in the Midwest and Who’s Who in the World. As a testament to her success, Dr. Heinicke was invited to be a guest lecturer at institutions like the University of Dar es Salaam in Tanzania and Southwest Community College in Iowa, and a guest artist at institutions like the Iowa Amateur Artists Association and Terrengannu in Malaysia. She also served in notable positions like visiting scholar at Fukuoka Jo Gakuin College in Japan, a consultant at the Pedagogical Institute in Latvia, judge for the Iowa Amateur Artists Association and chairman of the Iowa Sister States-Stavropol Commission.