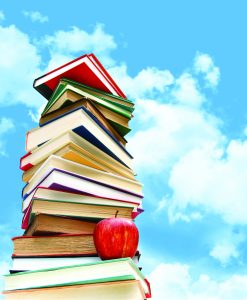 “My desk is a mess but my office door is always open,” says Dr. Janis Flint-Ferguson, who has been passionate about teaching since childhood. She loves the learning process, from researching and hunting information to combining it, sharing it, and applying it to her life and to her lessons. She is committed to bettering the world, and believes the best way to do that is to be available for her students whenever they need and to lead life with both humor and humility. She is not afraid to admit when she doesn’t know something, and relishes the opportunity to better herself.

Now boasting more than 40 years of professional excellence, Dr. Flint-Ferguson first began her journey in middle school. She was inspired by her teachers, who had such enthusiasm for their students and subjects; she wanted to be in that role for the future generations. Pursuing that goal, Dr. Flint-Ferguson earned a Bachelor of Arts from North Central College in 1975, and a Master of Science and a Doctor of Arts from Illinois State University in 1985 and 1993, respectively.

Dr. Flint-Ferguson is presently parlaying her background into her position as the chair of the Department of Middle School and Secondary Education at Gordon College in Wenham, Mass. She previously served Gordon College as a consultant to the in-service provider for middle schools, as the director of writing, and as a professor of English education. Additionally, she was a teacher of language arts at Gibson City Community Schools and Paris Union 95 School District, a trainer at Keys to Literacy-Vocabulary, and a facilitator at Book Study in Adolescent Literature. She is proud of the impact she made on her students and colleagues; it means a lot to her when students keep in touch and consider her part of their success story.
​
Outside of academia, Dr. Flint-Ferguson was constantly looking for other ways to share her experiences and knowledge. She co-edited “Readings are Writing” in 1995, contributed articles to professional journals, and reviewed young adult books for childrenslit.com. Dr. Flint-Ferguson also became affiliated with a variety of prominent organizations like the New England League of Middle Schools, the Northeast Alliance of Middle Schools, the National Council of Teachers of English, the International Literacy Association, and the Association for Middle-Level Education.  She was also a state representative at the Assembly on Literature for Adolescents. She remains an editor of the Journal of the New England League of Middle Schools to this day.
​
In recognition of her achievements, Dr. Flint-Ferguson was named College Educator of the Year by the American Association of Colleges for Teacher Education in 1997. She was also named Teacher/Educator of the Year by the Department of Elementary and Secondary Education for her collaborative spirit while working with middle school teachers and college professors on the Massachusetts state standards, which ranks among her professional highlights. Further, Dr. Flint-Ferguson was honored to be featured in numerous editions of Who’s Who in America, Who’s Who of American Women, Who’s Who in American Education, and Who’s Who in the East.

When Dr. Flint-Ferguson has spare time, she loves following open-wheel racing, and has not missed an Indianapolis 500 since 1986. She is also a lifelong Chicago Bears fan.