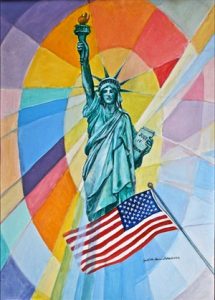 An esteemed artist and painter, Judith-Ann Saks is thrilled to be living out her childhood dream. She started out by completing coursework at the Texas Academy of Art, the Museum of Fine Arts in Houston and Rice University before ultimately earning a Bachelor of Fine Arts from Tulane University in 1966. She furthered her education with postgraduate work at the University of Houston in 1967.
​
After completing her academic studies, Ms. Saks dove right into her field. She participated in group shows at the Birmingham Museum of Art in 1967, the Meinhard Galleries in 1977, the Galerie Barbizon in 1980 and the Park Crest Gallery in 1981, as well as shows at the Margolis Gallery between 2005 and 2006. In 2008, Ms. Saks was commissioned as the artist for the “Martha ‘Lady’ Washington Pin” and in 2014, she served as the artist for the “Celebrating America Coloring Book.” Some other notable positions include artist for the American Revolution Bicentennial Project for the Port of Houston Authority, the curator of the student art collection at the University of Houston and a commissioned artist for the Pin Oak Charity Horse Show Association, the Roberts S.S. Agency and the Cruiser Houston Memorial Room. Further, Ms. Saks exhibited in one-woman shows at locations like the Alley Gallery, the 2131 Gallery, the Houston Public Library, the World Trade Club, the Women’s Club and the Bank of the Southwest. She is proud that much of her work is featured in the permanent collections of the Royal Norwegian Embassy, the Chancery in Washington, DC, the Department of Archives at the University of Alabama, the Archives of American Art at the Smithsonian Institution, the Library at Windsor Castle, the LBJ Presidential Library and the Peabody Museum, among others.

When Ms. Saks isn’t working, she enjoys pursuing hobbies like history and genealogy, and remaining involved in her community. She currently maintains positions as a historian for Colonial Dames XVII, the chaplain of the National Society Daughters of the American Revolution, the president of Colonial Dames of America, and the second vice president and historian of the National Society of the Colonial Dames of America. She served those organizations in many other roles over the years as well, including recording secretary, corresponding secretary, chapter curator, counselor and librarian.