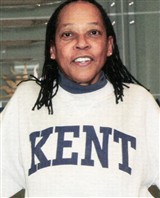 Writer, poet, educator, artist, activist, and soldier: Kenyette Adrine-Robinson has worn many hats over the course of her prestigious career. She joined the Women’s Army Corps in 1969 when she was just 18 years old, and served them until 1971. She returned to the Army in 1981 as the public information specialist for morale support activities in Wiesbaden and, in 1983, progressed to be the writer and editor of the public information office in Mainz, both in the Federal Republic of Germany. From there, she became a teacher intern in the Positive Education Program in Cleveland, Ohio, and a member of the residential team and a case management therapist at the Murtis H. Taylor Multi Services Center. In 1986, Ms. Adrine-Robinson joined Cleveland Metropolitan Schools, where she served until her retirement in 2010. During that time, she also worked as a resident photographer and teacher at the Ann Arbor Art Association, a teacher at the Cuyahoga County Juvenile Detention Center through the Cleveland Board of Education, an instructor in the department of Pan-African studies at Kent State University, and a teacher in the Child Management Program. Today, she continues to run Kenyette Productions, formed in 1976.
​
Notably, outside of her profession, Ms. Adrine-Robinson was a trustee of the Community Christian Church in Euclid from 2001 to 2005. She received a goodwill ambassador status from the Aruba Tourism Authority for more than 30 years of patronage, and from the African American Travel Conference after joining the Progressive Family Reunions group in 2010.

With such an extensive background, Ms. Adrine-Robinson had a wealth of experiences to share. She was the editor of “The Ghetto in Me,” “Love is a Child,” and “Black Image Makers,” and was the author of “Be My Shoo-Gar,” “Thru Kenyette Eyes,” and numerous more poems. She connected with the writing community through memberships with the International Association of Independent Publishers, the Verse Writers Guild of Ohio, the International Black Writers and Artists Association, the Urban Literary Arts Workshop, and the Poets’ & Writers’ League of Greater Cleveland. Additionally, she was a trustee for New Day Press Incorporated, a consultant for the Northeast Ohio Women’s Pre-Release Center, and a member of Karamu House, Incorporated.

Ms. Adrine-Robinson prepared for her endeavors by earning a Bachelor of Arts and two master’s degrees in education, all from Kent State University. She also became certified as a special education teacher, developmentally handicapped teacher, behavior disorders teacher, and learning disabilities teacher in the states of Ohio and Michigan, and maintained affiliation with a number of prominent professional organizations. Some of these include the Kent State University Alumni Association and the Artists in Education Program with the Ohio Arts Council.