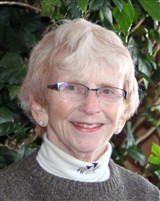 As an educator, religious leader, and author, Rev. Dr. Mary Louise Stanley Weinkauf, has stood out among her peers. She started her career as a University of Wisconsin-Eau Claire graduate and instructor at the University of Tennessee from 1961 to 1966, and steadily progressed from there. From 1966 to 1969, she served as assistant professor of English at Adrian College, and from 1969 to 1989, she served as a professor and the head of the English department at Dakota Wesleyan University. Between 1989 and 1991, she was a part-time instructor at Columbia College.
​
In addition to her work in academia, Dr. Weinkauf was also heavily involved in religion. She was pastor of the Calvary Evangelical Lutheran Church, the Siloa Lutheran Church, and Ontonagon Faith, as well as the director of Lay School for Mission. Dr. Weinkauf also worked as a supply preacher for Northern Great Lakes Synod, and as a board member of the Lutheran Campus Ministry Committee for Wisconsin and Upper Michigan and the Fortune Lake Bible Camp.

Actively engaged in her community, Dr. Weinkauf has given her time and energy to various organizations and institutions, including the Lakeland Area Food Pantry, Pastime Club, and North Central Wisconsin Thrivent Financial for Lutherans. She was a trustee of the Educational Foundation of Delta Kappa Gamma from 1986 to 1990 and a member of the board of directors of the Ontonagon County Habitat for Humanity from 1995 to 1997. Further, Dr. Weinkauf maintained affiliation with the American Association of University Women, the National Council of Teachers of English, the South Dakota Council of Teachers of English, the Science Fiction Research Association, and the Popular Culture Association, as well as the John Milton Society and the South Dakota Poetry Society.

Another passion Dr. Weinkauf pursued during her professional journey was writing, aided by her extensive background and array of experiences. In 1994, she published “Hard-Boiled Heretic,” a story of the character Lew Archer, and “Sermons in Science Fiction,” a study of the British science fiction and mystery author S. Fowler Wright. Two years later, she wrote “Murder Most Poetic: The Mystery Novels of Ngaio Marsh.”

Dr. Weinkauf’s hard work and dedication did not go unnoticed. In recognition of her accomplishments and achievements, she was featured in numerous editions of Who’s Who in America, Who’s Who in American Education, Who’s Who in the Midwest, and Who’s Who of American Women. She prepared for her endeavors by earning a Bachelor of Arts from Wisconsin State University at Eau Claire in 1961, a Master of Arts and a PhD from the University of Tennessee in 1962 and 1966, respectively, and a Master of Divinity from the Lutheran School of Theology in 1993.