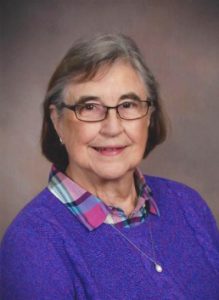 Teaching people to be accountable for their outcomes, S. Kay Rockwell, RN, PhD, most recently served as a professor in agricultural leadership in the Department of Education and Communications at the University of Nebraska–Lincoln (UNL) from 1990 to 2003. She began her professional career instructing at Lincoln General Hospital in 1962, remaining in this position for five years while also serving as assistant director of nursing education from 1965 to 1966. She then joined UNL as an evaluation technologist from 1979 to 1984, and moved up the ranks to numerous other roles such as advisory board member of the Department of Adult Education and Social Foundation, professor in the Cooperative Extension Division, and evaluation specialist. In addition to this tenure, Dr. Rockwell trained and consulted extension specialists and agents on program evaluation at the UNL Nebraska extension and has presented at myriad workshops and symposia in her field.

Dr. Rockwell’s crowning professional achievement was her appointment in extension research and teaching. Her research focused on developing outcomes, for which she was a leader in the hierarchy. She became well-known internationally for her outcome-based accountability system. After that, Dr. Rockwell did long-distance education and taught a course via satellite through a $2,000 grant from the U.S. Department of Agriculture (USDA), which she taught across the country. The USDA videotaped her teaching mono video and stereo audio so students could ask questions; an instructor was at each site with about 400 students. Not fond of these technological advances, she went back to classroom teaching because she enjoyed it better.

Prior to the start of her professional career, Dr. Rockwell made the choice between home economics and nursing, a standard selection for women at the time, and chose the latter. After graduating from the nursing program at Lincoln General Hospital in 1960, she pursued a formal education at the University of Nebraska, where she obtained a Bachelor of Science in Nursing in 1962, Master of Arts in adult and continuing education in 1975 and PhD in community and human resources in 1984. She is a first-generation university graduate. Additionally, Dr. Rockwell is a registered nurse in the state of Nebraska.

Active in her local community, Dr. Rockwell followed the path of least resistance and took advantage of what was available to her. She has volunteered with the United States Agency for International Development (USAID) since 2002, an independent agency of the U.S. federal government that is primarily responsible for administering civilian foreign aid and development assistance. She also chaired the social ministry committee of the Nebraska synod of the Evangelical Lutheran Church of America, as well as served on its advisory office board. As a writer, Dr. Rockwell was the research-in-brief editor of the Journal of Extension from 1987 to 1990 and has contributed multiple articles to professional journals.

To keep up with ameliorations in her field, Dr. Rockwell maintains involvement as a North Central regional representative with the American Evaluation Association’s extension education evaluation topical interest group since 1990. She was also previously active with the Nebraska Cooperative Extension Association, the Adult and Continuing Education Association of Nebraska, Epsilon Sigma Phi and Gamma Sigma Delta. In light of her accomplishments, Dr. Rockwell was given a Certificate of Achievement by Epsilon Sigma Phi in 1991. Likewise, she is an Albert Nelson Marquis Lifetime Achievement Award and Distinguished Humanitarian Award recipient, and has been listed in the fourth edition of Who’s Who in American Education and 71st edition of Who’s Who in America.