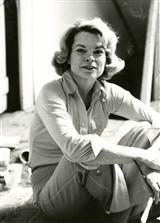 Growing up in Old Lyme, Conn., a 19th century artist colony, Virginia Greenleaf Koch spent much of her childhood observing the influx of talented painters around her. Her interest grew into a strong desire to make her own mark on the field, so in 1941, she set off in pursuit of her dreams. Over the course of the next two decades, she honed her craft with the likes of Ivan Olinsky, Robert Brackman and Gene Davis, and studied at schools like American University and Yale University. She feels her education really pushed her onto the path she followed the rest of her career.

In 1970, Ms. Greenleaf Koch participated in her first solo exhibition, which was at the Studio Gallery in Washington, D.C. She quickly became a show favorite, and earned solo spots at the Haslem Gallery in 1971, The World Bank Group in 1972, the Art League of Northern Virginia and the In Town Gallery in Ohio in 1973, the Main Street Gallery in Boston from 1976 to 1981, and Gallery 124 in 1983, among others. Ms. Greenleaf Koch’s first group show was Newport News from 1971 to 1972, and she swiftly made a name for herself in that circuit as well. She was invited to be part of group shows at the University of Richmond in Virginia in 1972, the University of Northern Virginia in 1973, the University of Maryland and the Corcoran Gallery in 1975, the Parsons Drefyss Gallery from 1976 to 1977, the Phillips Collection in 1989, and the Maritime Museum from 1990 to 1991, steadily making her way through the industry. Her most recent group exhibitions were at the Diane Birdsall Gallery from 2008 to 2014, Pet Connections from 2005 to 2006, and the Cooley Gallery from 2004 to 2006. Her latest solo show was at the Christy Lawrence Gallery in 2003. Notably, some of her pieces are exhibited in the permanent collections of the Department of State in Washington, D.C., as well as in various ambassadors’ residencies and the Lyme Academy of Fine Arts.

​When Ms. Greenleaf Koch wasn’t working, she was very active in her community. She was on the board of directors of the Arts Council of Nantucket, and was affiliated with the Hospital Thrift Shop in Nantucket, Mass., the Olde Town Citizens’ Committee in Alexandria, Va., and the Georgetown Citizens’ Association in Washington, D.C. She has also been a member of the Studio Gallery of the Foundry Group of Women Painters, the Art League of Virginia, the Art Foundation of Nantucket History, the Old Lyme Historic Foundation, and Artists’ Equity. She remains a member of the National Symphony of Washington, D.C.