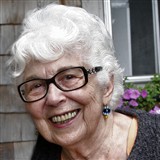 Renowned for her prowess as both a sculptor and an educator, Yefkin Megherian has spent her life pursuing her passions. Her professional endeavors began at Warwick Valley Central School, where she taught high school science from 1946 to 1947, and were followed by 18 years as a teacher for the New York City Board of Education. In 1986, Ms. Megherian elected to leave academia in favor of devoting her career to her love for sculpting, and it paid off. She continues to thrive in the field to this day, and has reached international acclaim.
​
Some of the highlights of Ms. Megherian’s career include completing a statue of Pope John Paul II, which is now part of the Vatican’s art collection, and sculpting a bust of Archbishop Tiran Nersoyan, which is now mounted on a pedestal at the St. Nersess Armenian Seminary in Armonk, N.Y. She is also proud to have been included in international medallic art shows in Belgium and Romania, among other places, and to have created a medallion that is now in the collection of the British Museum, and for the Alex and Marie Manoogian Museum in conjunction with the St. John Armenian Church in Southfield, Mich. Further, Ms. Megherian has exhibited her art around the globe, most recently for the Armenian Museum of America in Watertown, Mass, and the Thompson Gallery at the Cambridge School of Weston, both in 2015. Other notable exhibitions include the FIDEM Congress in Sofia, Bulgaria, in 2014 and in Glasgow, Scotland, in 2012, the Medialia Gallery in New York City, also in 2012, and the Nordic Heritage Museum in Seattle, Wash., in 2004, among countless others. From 2002 to 2009, Ms. Megherian was a consultant for the bronze doors of the St. Vartan Armenian Cathedral in New York City.

Over the years, Ms. Megherian has been recognized numerous times for her talent and passion. She won the Compleat Sculptor award in 2003, the Merit Award in 2000 and the Tallix Foundry Award in 1996, all from Pen and Brush, Inc. She was also named to eight volumes of Who’s Who in America, seven of Who’s Who in the World, and five of Who’s Who of American Women.

In Ms. Megherian’s spare time, she enjoys reading, travel, and opera, as well as spending time with her four children, Zarmi, Lori, Narrek and Talin, nine grandchildren, and two great-grandchildren. She was married to Rev. Fr. Vartan Megherian, an Armenian priest, for 37 years prior to his death. She makes an effort to stay connected to her peers through participation in organizations like the National Museum of Women in the Arts, the American Medallic Sculpture Association, the National Sculpture Society, FIDEM, and Pen and Brush, Inc.

Ms. Megherian prepared for her journey by earning a Bachelor of Arts and a Master of Arts from the University at Albany in 1945 and 1946, respectively, and becoming a certified teacher of primary grades and secondary schools in New York, as well as an ancillary certified art teacher via the Board of Education in New York City. Upon her career change, she went back to school to obtain an associate of science in fine arts from Queensborough Community College in 1994.